Naval Tecno Sud Boat Stand has reached the final stage of assembling a protective cabin built expressly for Sanlorenzo Yachts. This is yet another flag to add to the large-scale structural works carried out by the internationally operating company headed by Roberto Spadavecchia at its Bari-based headquarters. 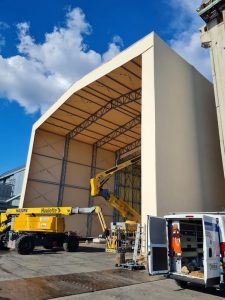 for the well-known Ligurian shipyard, measures 28.5 meters in length and 20 meters in width, while its height is up to 14 meters.

The work was supervised in every detail by Barbara Spadavecchia, who, with great dedication, managed to fully satisfy the request of the prestigious client.

As for the production time: the work to build the structure took about 45 days, while assembly took just 15 days.

How a Naval Tecno Sud Boat Stand cabin is made

The structural peculiarities of the work consist in the fact that this is a double cabin, where the larger volume is fixed while the other cabin is telescopic on rails and is basically inserted into the main volume. If necessary, as explained, this extension opens further to lengthen the size of the structure itself and accommodate larger boats inside.

In the world of yachting, Naval Tecno Sud Boat Stand is a further example of the kind of corporate excellence that makes Made in Italy proud. A Tricolour brand that, as is well known, constantly renews its popularity abroad, especially in the nautical sector. It is no coincidence that Naval Tecno Sud Boat Stand will be present at the METS Amsterdam (booth 05.267,EL.412), as the flagship of the accessories-structural market in the yachting sector. And it is no coincidence that the materials used for this cabin are all Italian, from iron to PVC, as is also the design study carried out, we repeat, by Barbara Spadavecchia. 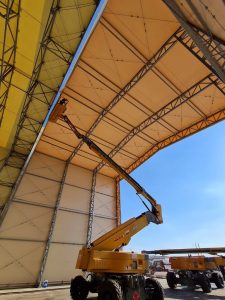 Speaking of costs, the administration offices are keen to stress that: “Naval Tecno Sud’s cabin is a CE certified product, and despite the use of high quality all-Italian materials, we are able to compete even with products manufactured and sourced in Asia, an area where the cost of transport has increased along with the cost of simple production”.

This cabin will soon be followed by the installation of another one at Cala Saccaia in Sardinia. Then Naval Tecno Sud Boat Stand will be involved in the construction of a larger cabin, which will be mounted this time in Malta. “Owners want to have their boats under cover, and shipyards too have realized that this type of cabin, as well as being highly competitive in terms of price, has considerable advantages over sheds, including the possibility of moving the cabin to the desired location at will,” explains Roberto Sapadavecchia.

As far as environmental sustainability is concerned, these cabins can also be reused in several places and technically for several purposes: the example of an 80-meter-long cabin commissioned a couple of years ago by Fincantieri for the construction of a bridge in Romania, along a river shipyard on the Danube, is worth mentioning. The same cabin, which was dismantled and transported, was then reused in Valeggio sul Mincio (Verona), at one of the shipbuilding giant’s sites.

Virtual Boat Show: buying a boat in the time of Covid-19