After the success of the 42, TecnoRib presents the brand-new Pirelli 35 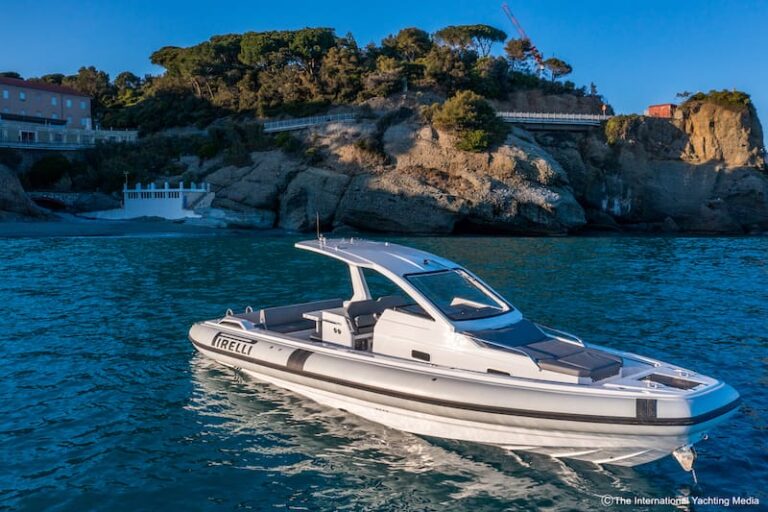 walkaround, a worthy heir of sportiness and elegance with more moderate aesthetics, liveability and performance.

The sportiness of lines has always characterised the well-known Pirelli inflatable boats built by TecnoRib but the Pirelli 35, exclusively in water for the first time for The International Yachting Media, denotes a stylistic transformation dictated by the intuitions of the historic Swedish studio Mannerfeld Design Team, which penned some among the most interesting projects in the nautical (and not only) scene. The designer’s goal was to give a certain lightness and grace to boats that have always been distinguished by muscly and sharp lines in a perfect synthesis between sportiness and elegance. In my opinion, a perfectly successful exercise in style: the Pirelli 35, in fact, stands out for the modernity and cleanliness of her lines.

It’s a cold day with north wind in Liguria. The sea is rippled by a strong land breeze. Far from the coast, the heavy sea makes itself heard. These are the ideal conditions for a sea trial.

The two Mercruiser 300HP engines and the sterndrives take us out of the port. The noise is attenuated by the good insulation of the engine compartment. We test the performance of the Rib, which proves to be easy to drive and steer, soft on the waves and definitively dry despite the strong wind. 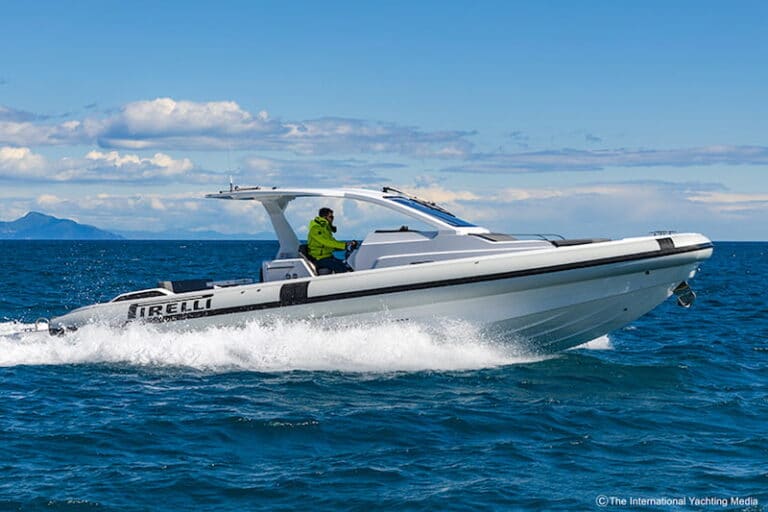 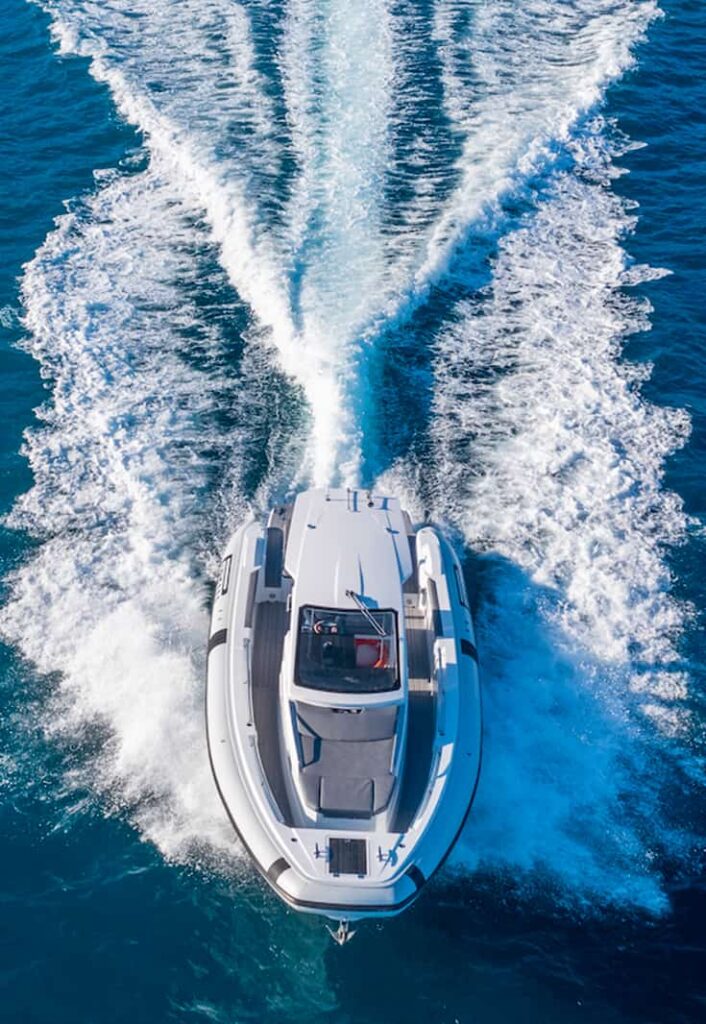 The two hull steps work properly, making navigation efficient while my knees have found an excellent balance, without compromising the lateral movement when turning so as to make the boat very safe.

Acceleration is progressive and exciting, as well as the extremely agile behavior in the tightest turns which produces important variations in lateral trim, but always very controlled and without cavitation effects on the propellers.

The central steering console is compact and well-sized, with a proper inclination of the tools. I have a feeling of excessive proximity of the throttle levers to the driving wheel which forces the pilot to a not too relaxed position. 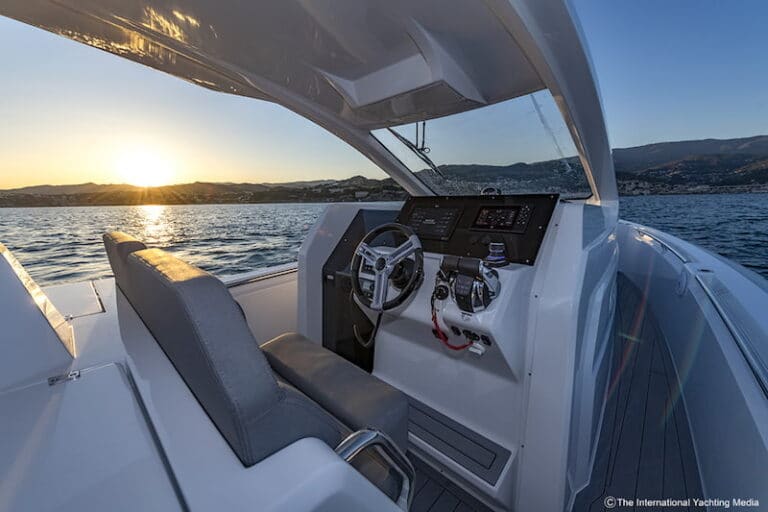 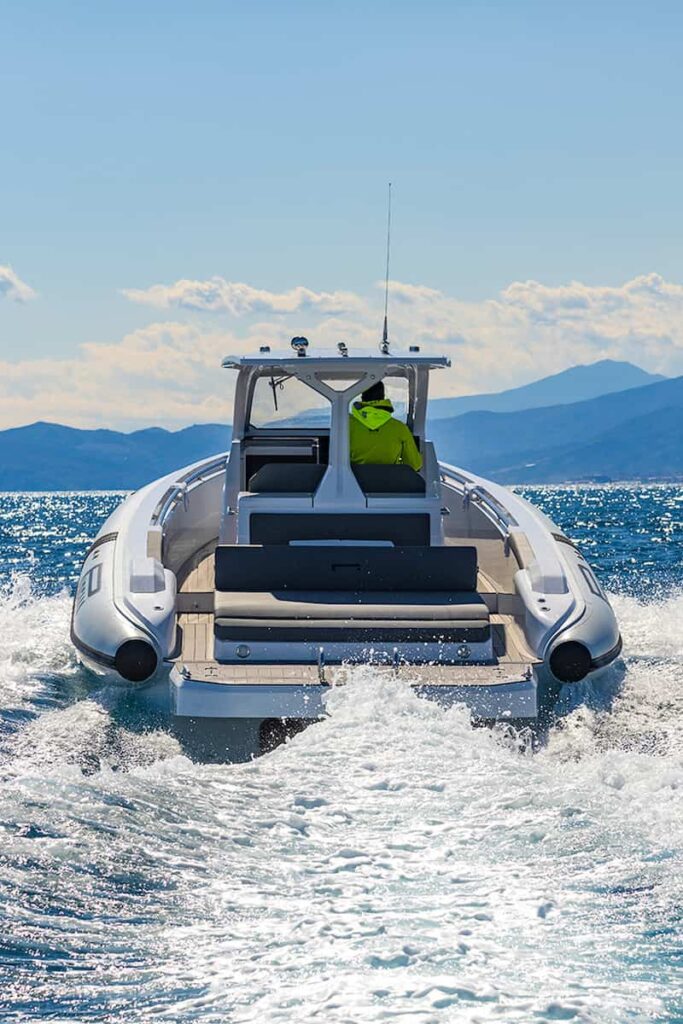 Two sofas with folding seat accompany the console, leaving excellent space for normal builds. The hard top with large protective windshield has a sleek line and the stern support, with an accurate yet robust design, contributes to stylistic refinement. Many inflatable boats often have low habitability due to structures that, useful for the sturdiness of the hull, are however harmful to overall livability: the Pirelli 35, thanks to an in-depth study on deck dimensions, offers large, clean and uncluttuered walking surfaces, even in the side-decks that usually represent a critical point for Ribs. 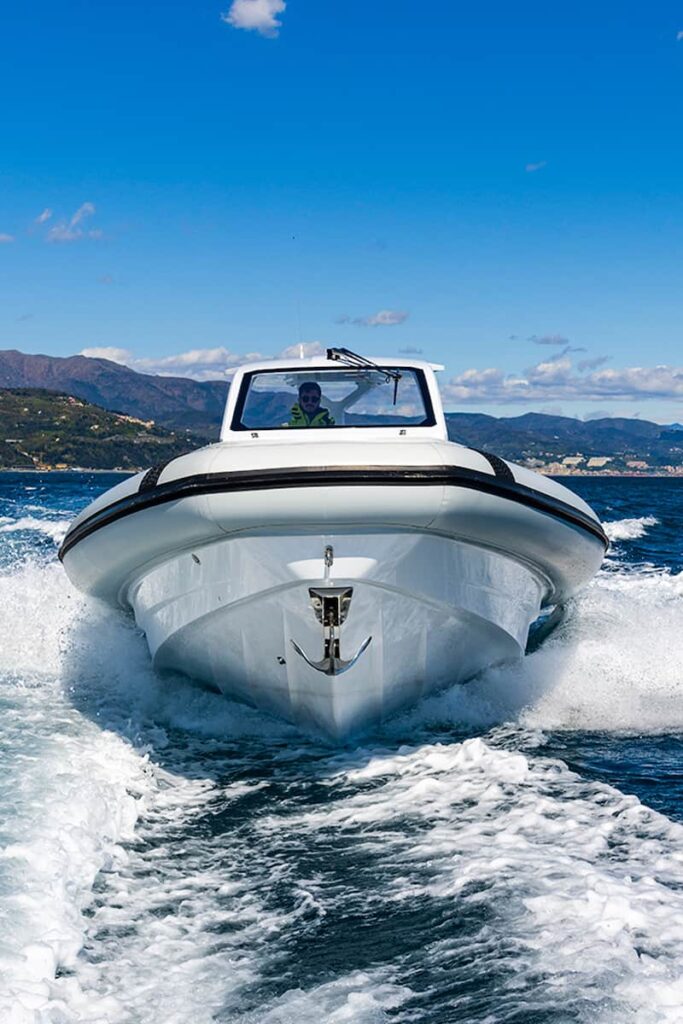 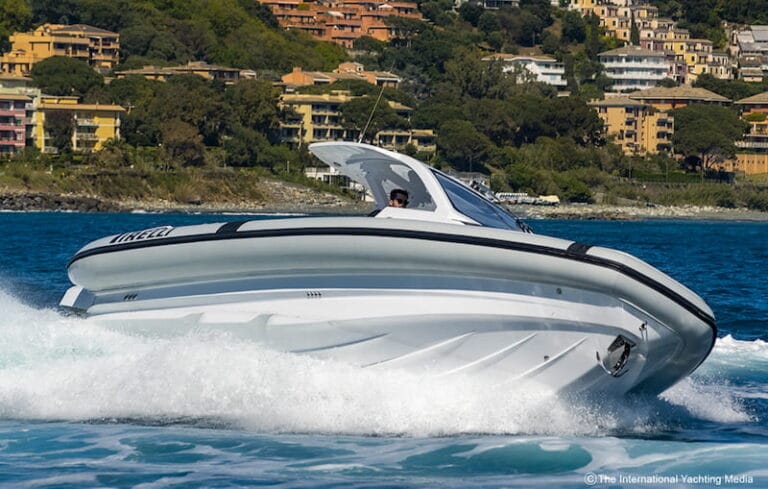 Circulation on board is free and safe, thanks to some stainless steel handrails positioned on the sides, at the bow and around the bow sundeck. From midship to the bow, the bulwarks are high and protective. Featuring a length of 11 meters and a weight of over 8 tons, the Pirelli 35 is able to deliver excellent performance: a speed of over 47 knots, explosive acceleration and extraordianry evolutionary capacity.

Fuel consumption is resolutely slow: just 64 l/h (3.2 l/nm) at 3,000 rpm, with a range of almost 237 miles. Great, especially if you consider that the boat is powered by petrol (and not diesel) engines.

With a very Mediterranean and sporty character, the Pirelli 35 offers, as mentioned above, a well-sized bow sundeck and a generous stern sunbathing platform with adjustable backrest: when moved forward, it can be used as a headrest, leaving more room to the sundeck while, when folded aft, it acts as a backrest for the cockpit sofa. Although not new, the latter is a certainly effective solution.

Surrounded by two sofas, the cockpit can be used as both a living zone and a dining area: a three-section table, in fact, can be mounted on two aluminium legs that, when not in use, can be stored in special floor compartments. 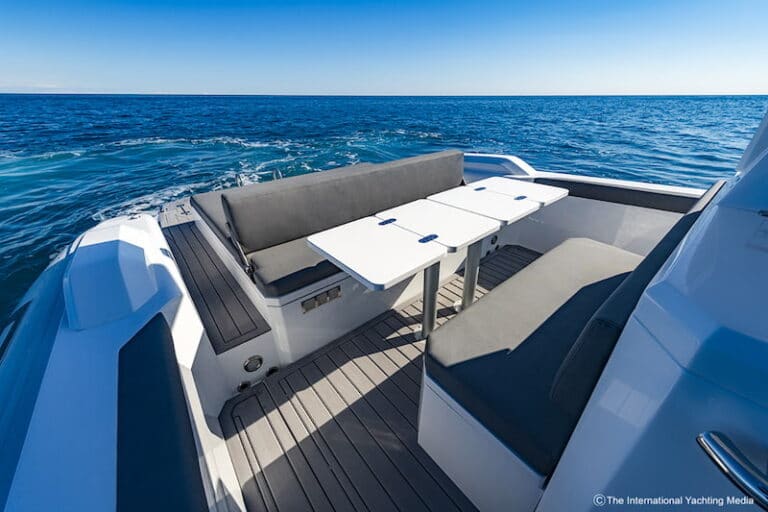 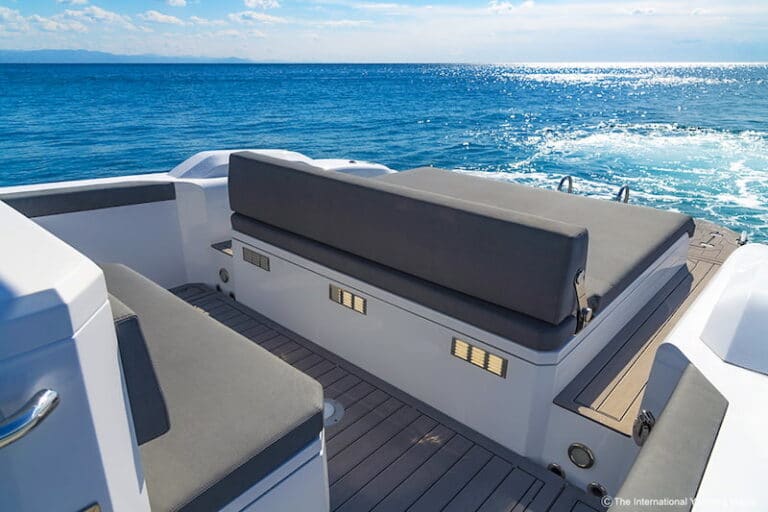 The overall quality and sturdiness of the boat can also be perceived in the details: the table, for example, is rather heavy and sturdy like the thick fiberglass covers of the two side cabinets at the base of the column that supports the hard top. The two specular compartments hide a stainless steel sink on one side and a surface designed to mount a stove or barbecue on the other. 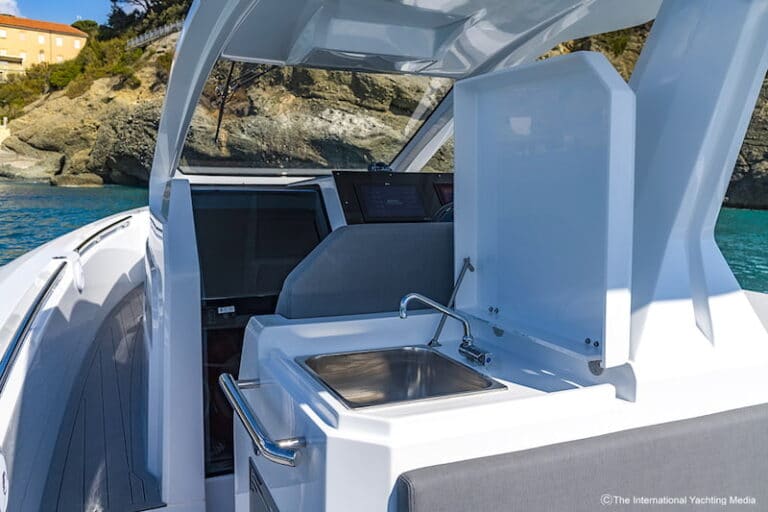 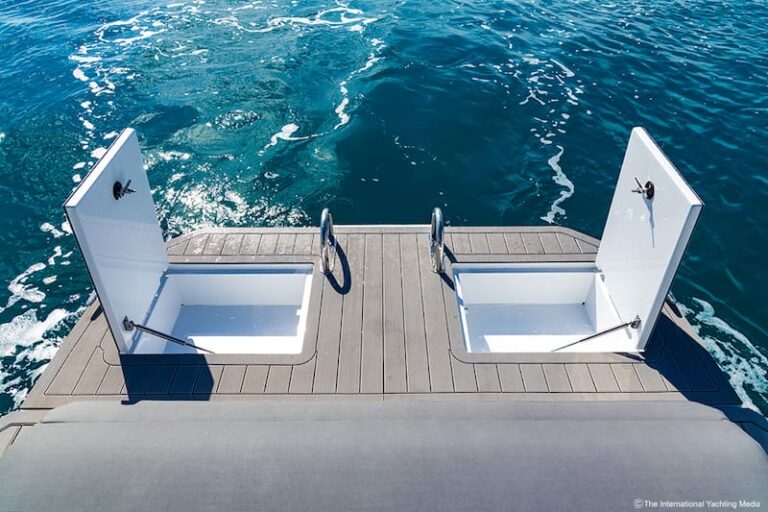 A drawer refrigerator completes the outdoor kitchen equipment. At the bow, there is a comfortable work area and a fiberglass fitting with an anchor locker covered with a rubber top with car tire notchign effect that, typical of Pirelli, is also re-proposed on the tubulars amidships. The locker is very clever in its arrangement: the Quick winch is placed on a shelf, leaving the chain drop with excellent depth. When at rest, the anchor remains cantilevered on the bow straight, integral with the sturdy stainless steel structure that supports it. Seen from the sea, it gives a stylistic effect of breaking lines, almost a point of interesting that captures attention.

A smoked plesxigalls sliding hatch and three steps give access to the lower deck. There, you can find a single space with a double bed positioned towards the bow, scenically accompanied by two lateral shelves equipped with lighting. The asthetic refinement goes hand in hand with a certain ease of use: on the vanity unit, in fact, a crystal cup-shaped washbasin with design tap stands out. 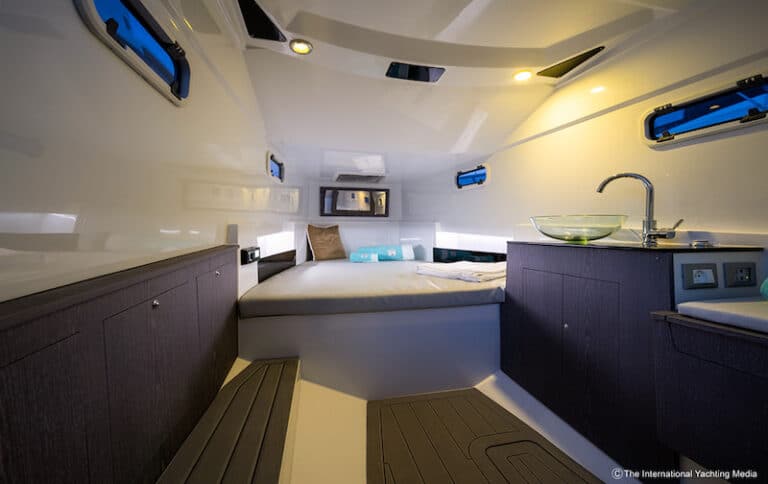 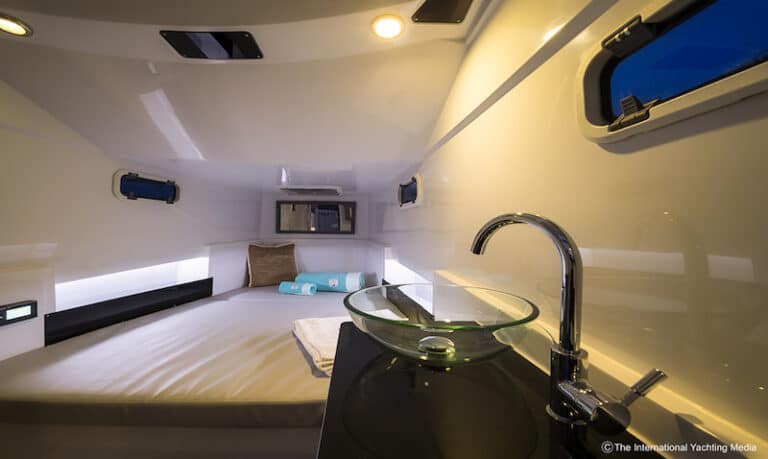 Some doors hide an equal number of technical compartments that can also be used as storage compartmens for small objects; there’s plenty of storage space everywhere, even under the bed where, in fact, there are two useful lockers. A compartment with a hinged lid hides an electric toilet. At first glance, it seems to have been sacrificed in a corner, but, actually, it is very comfortable and well-sized. 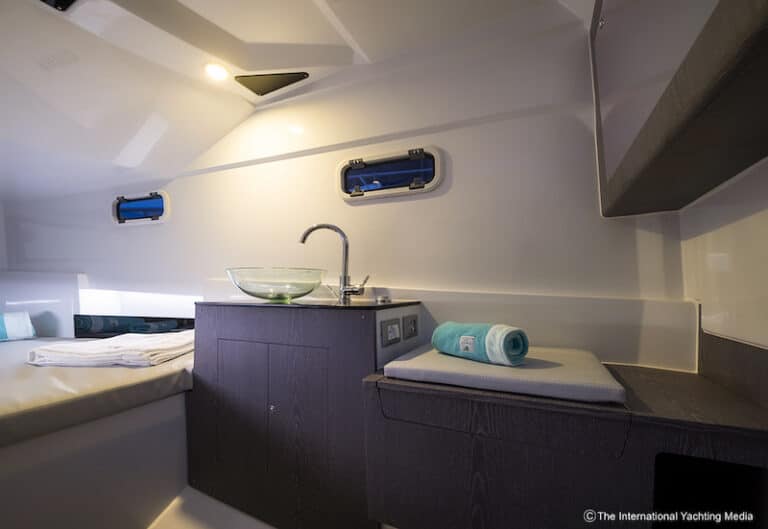 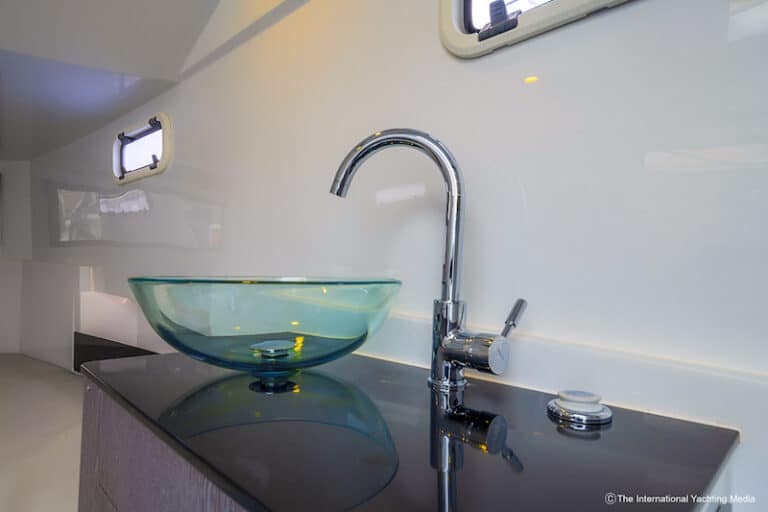 The atmosphere of relaxation and brightness is emphasized not only by the warm tones of the wood and fabrics, in contrast with the white of the gelcoat, but also by the light that penetrates from the side portholes and the skylight. Below the aft sundeck, an immense engine room offers ample space for maintenance around the engines, with just a few systems mounted on the side walls, thus leaving additional useful space for the eventual assembly of bulky equipment such as the power generator. 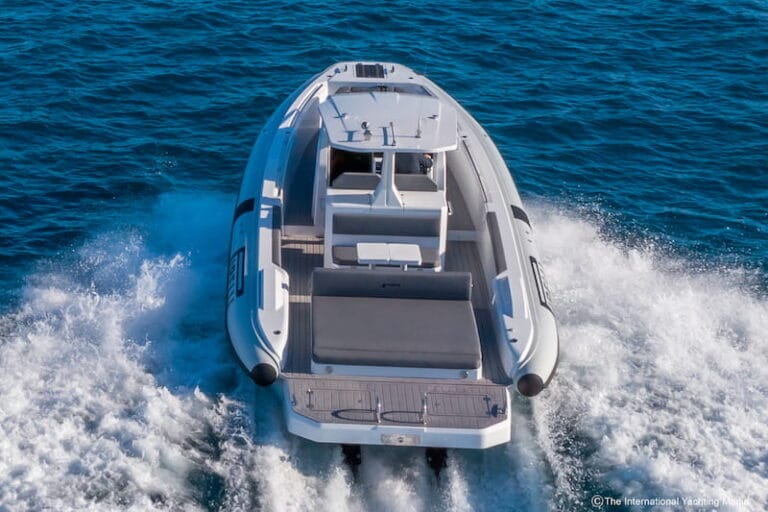 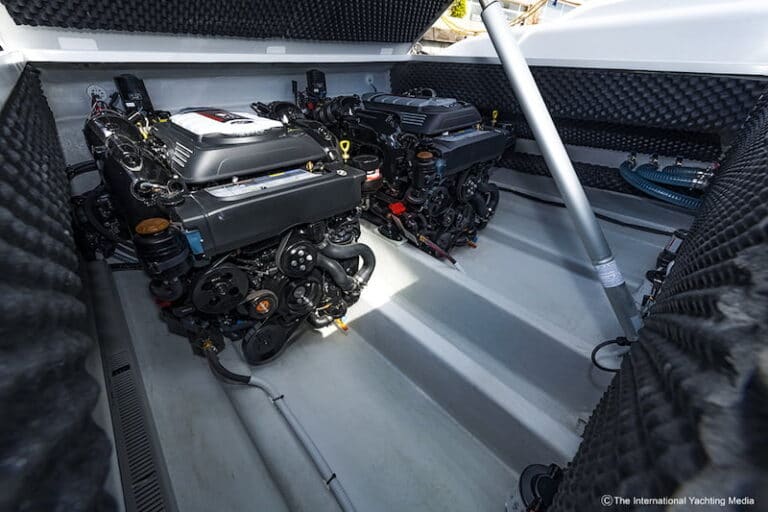 In conclusion, the new Pirelli 35 has fully convinced us: the optimal use of space makes the passenger feel like he is on an inflatable boat much larger than 10.35 meters. Exiciting and performing, it’s perfect to be used as both a short-range coastal cruiser and a superyacht tender.

FIM 340 Regina, the evolution of the species

New life for Morning Glory: Lusben has completed the refit