Brand-new for 2021, the Tuccoli T210VM is an entry level fisherman, perfect for offshore fishing even in rough seas. We tested the boat during the Genoa Boat Show. It was a day that, from the first light of morning, did not bode well at all: lots of rain and gusts of north wind. The T210VM proved to cope very well with 1.5 meter high waves, even at top speed. Navigation on board was absolutely linear and pleasant, confirming that Tuccoli boats are not afraid of the Mediterranean or of the weather that can change it nervously. The T210VM is a no-frills center console, designed for fishing, but it is also perfect for spending a day at anchor with friends. 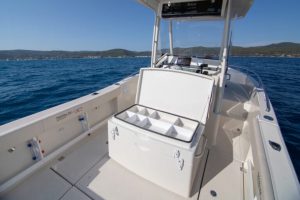 The deck has no structural obstructions from the stern to the bow. But there’s everything you need for your fishing activities, including nine lockers, one of which in the bow is simply immense. The central console designed between the spacious side-decks gives the freedom to move around quickly on board as the angler demands during the fight.

There are a number of engine options suitable for this fishing boat, but all of them are strictly outboard. During our test, the T210VM was fitted with a Suzuki DF 200 AP. Otherwise, the owner’s choice has to be between 140 and 250 hp options. When fitted with a properly “pumped up” propulsion system, the VM210 can reach a top speed of 43 knots.

The recommended cruising speed is 27 knots. Consumption is very low, also thanks to a displacement of just 1,800 kg. In accordance with the boat size (overall length 6.80 meters and a beam of 2.55), the deadrise angle is 20 degrees.

At the dock of the Genoa Boat Show, the T210VM is moored alongside, and at first glance this little Tuccoli hides modestly the great performance she is capable of guaranteeing. We will realize this as soon as we leave the Bocca di Levante. Before setting sail, we switch on the Garmin supplied, we cast off and the T210VM slowly begins her navigation with the engines at minimum revs. We continue at the classic three knots allowed in the port’s exit channel, gaining the open sea.

The Genoese coastline is getting smaller, and we proceed, noticing a sea that tends to get rougher, even once we have overcome the turbulence generated by the other boats crowding the stretch of water in front of the Show. Once we’ve taken the controls, the driving position is really comfortable. Everything you need in terms of instrumentation is within sight, with no detectable distractions. The bow is designed high and protected to stay dry. And it will prove that very well during the test.

Despite the one and a half metre waves we faced, to our surprise, hardly a drop of water got in. Unbelievable. And while sailing, especially when planing, visibility at the bow is always almost total.

Two people can sit comfortably at the helm, enjoying the endless handholding possibilities offered by the handles on the t-top structure and the handrails that surround almost the entire boat. This confirms that safety on board the T210VM is never an option. 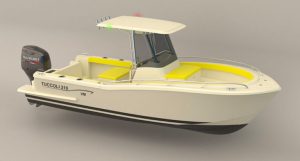 It’s time to push the throttle. Gradually the T210VM gains speed. I write down the performance data in my notebook and at 10.6 knots the fuel consumption is 13.6 l/h. At this intermediate speed Tuccoli’s fisherman is in a horizontal and stable position. We accelerate to find the planing speed even by positioning the trims. We go from 10 to 18 knots in the blink of an eye and we are now on plane, supported by an excellent hull, which is now starting to free itself from the resistance of the water. The Garmin display now shows 20.4 knots and a sea depth of 13 meters. The Suzuki 200’s dashboard shows 4 thousand rpm and fuel consumption of 23.4 l/h.

At top speed (and we’re three not-so-light men on board) the planing hull always impresses us with its precision and safety. We get about 32 knots and refine it with the Suzuki 200‘s trim. 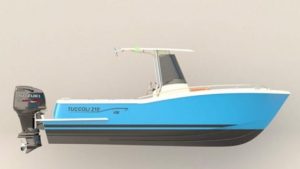 almost as if we’ve really spotted the fish we want to catch. Will it be an exotic barracuda? The Tuccoli T210VM rolls into the waves all by itself. And it hardly seems to roll at all, despite the rough sea.I think of the fight with a tuna, the flexing of the rod and the final scene of the catch in the cockpit The T210VM undoubtedly reveals herself as the fishing boat par excellence, which every novice angler should consider carefully.

We set off again with the intention of putting the T210VM, which has so far performed extremely well, through its paces. Close to the Pelagos Sanctuary, the Suzuki 200 vehemently increases its decibels, making itself heard, and at the stern the wake forms cleanly in the chromatic prominence of the white foam of oxygen. The fishing boat is out of the water and the bow gradually rises. The boat’s manoeuvrability is always excellent, thanks also to the very precise rudder.

The rough sea does not bother the fisherman in any way. Even the hull doesn’t seem to rattle at all and there are no strange bumps. The boat responds to turning with great precision and stability. Tight turns and counter-turns on an upwind wave, which we specifically look for in addition to the already rough sea, do not affect the hull: there are no smudges or unusual noises or creaks. The T210VM is anything but “wobbly”, it does not jump but instead overcomes the wave without shaking. 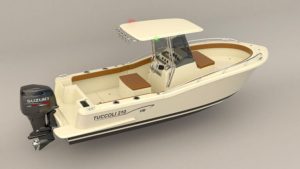 Tuccoli’s T210VM is a boat with the soul of a true fisherman. The kind of person who is not afraid of winter or rough seas. A fisherman who enjoys deep-sea fishing for sport, passion and job. If you are looking for an all-around boat, the T210VM is the best option for you. Such a fisherman will allow you to go further than 6 miles from the coast, always guaranteeing safety and fun.

The word of honour also goes to a fisherman with a capital “P”, with whom Tuccoli designed the boat. We are talking about Marco Volpi, the champion of sport fishing by boat, who offered his experience to the development of the T210VM project and its predecessor, the T250VM.

The T210VM is also perfect for a romantic outing in the afternoon with your partner. The large foredeck lends itself to laying out the equivalent of an even sizable sundeck. The boat is well-performing at sea and doesn’t cost a lifetime’s worth of sacrifices: EUR 40,000 + VAT. Moreover, the small size translates into lower maintenance and mooring costs than other larger yachts. Lastly, the boat is easily trailerable. 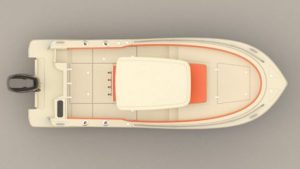 Looking from the quay, I was struck by the genuine appearance of this fisherman. Like an honest boat that doesn’t have any particular aesthetic or design ambitions. But what convinced me as soon as I climbed on board was the layout, which has been designed without neglecting anything that is needed for fishing. The T210VM is a boat that, despite its limited size, offers generous spaces for fishing “all together”. Four people find the space they need to move around and follow the fish around the perimeter. In short, there is room for every member of the team in what becomes a real fighting “ring”.

As far as rod holders 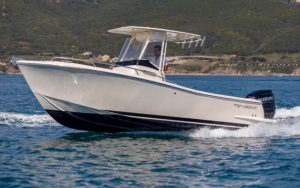 and their layout are concerned, all you have to do is request them from the shipyard, which will be able to provide the set-up preferred by the owner. Another ingenious optional extra is, for example, the padded gunwale, for a softer seat when waiting for the catch. Or the addition of a shower in the central part of the boat, which is always useful.

The deck has a floor area of 13.5 square meters, with a livewell and standard shower located aft. There is no doubt that this area has been designed with fishing in mind, and the sides (with the rod-holding cylinders inserted) grow proportionally, protecting the side-decks.

The hull is in solid laminate, with variable thicknesses ranging from 8 millimeters on the side to 15 millimeters on the keel, all reinforced with a structural grid that is partially counter-moulded. The construction is of hand-layered vinylester and polyester composite, while the deck has a “sandwich” structure. And the core is 15mm PVC.

There are nine lockers in total: two on the sides in the cockpit and one in the middle aft. On the foredeck there is another very large locker, and we’re sure that here fishermen will be spoilt for choice as to how to fill it with fishing nets and whatever else they need in terms of life-saving equipment. An anchor locker is added to the bow and a further locker is located in the forward seat in front of the console. This in turn has a space in the stern where you can store retail accessories such as a digital fishing scale or cutters. 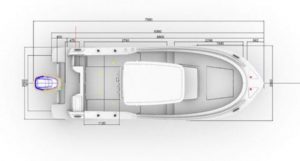 In the central part of the boat, the t-top dominates the scene, equipped with a stern beam for four rods. And on the helm station the windscreen has two wipers, proof that those who choose a Tuccoli are not afraid of any sea or weather conditions. Inside the padded bench of the helm station (useful for 4 people), there is additional space for storing bait and smaller fishing equipment. The alternative is a trellis-style riser, with a backrest and a dedicated seat, and this is how the T210VM of this unforgettable test was set up.

Fabiani Yacht: Hybrid, the forerunner of green boating in Genoa