Tom Cruise, Lady Gaga, Beyoncé and other celebrities: in one way or another they choose, or have chosen, by owning or chartering them, VanDutch Yachts. An iconic brand, indistinguishable, because it is unique and, to date, nothing else is comparable. Indistinguishable because VanDutch does produce luxurious yachts, but above all there is an idea of well-being, rich in aesthetic forms and a spectacular concept which paradoxically distances itself from the materialism of the product.

This year’s event is sold-out. And given the clamour that the VanDucht yachts caused at the Genoa Boat Show, attracting everyone’s attention, we’re expecting even more from orders. “The market was waiting for the brand to make a comeback and it has been satisfied“. Now with a shipyard like Cantiere Del Pardo behind it, VanDutch will certainly experience an important growth in terms of “structure, reliability, after-sales assistance. A structure that was previously missing (…),” explains Veronica Bottasini, Marketing and Communications Manager at Cantiere del Pardo.

9.81 meters long, the VanDutch 32 has given way to the 12.48-meter VD 40, which this year features a whole new colour palette. Because “it has been scientifically proven that colours have a positive influence on mood and behaviour”. 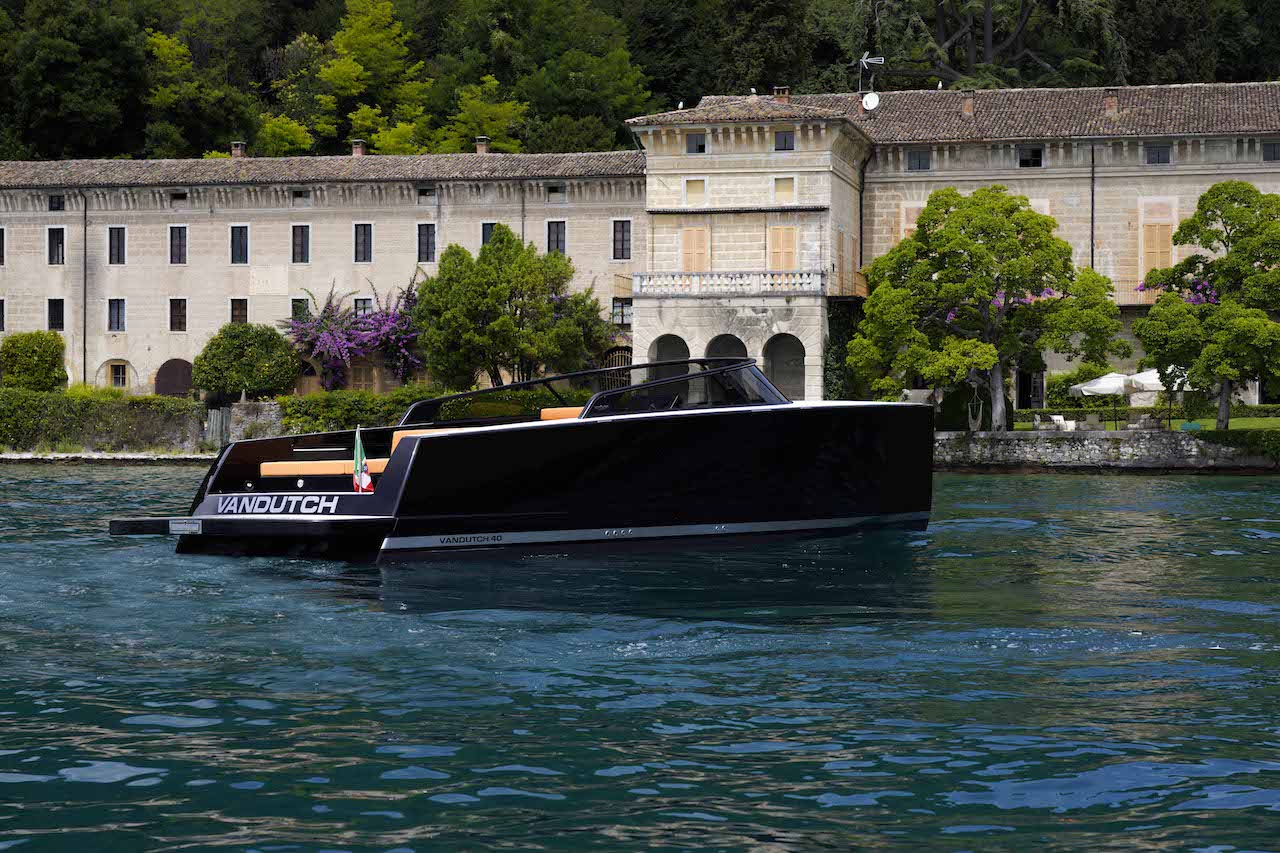 The VanDutch philosophy is best expressed when associated with a concept that speaks of “nautical poetry”. On board these yachts – the brand of which was acquired in 2020 by the Made in Italy of “Cantiere del Pardo” – the owner actually disregards the ostentation of status in favour of the marvellous vessel he chooses.

The owner embodies nautical ‘fleeting beauty’, for example on board a VanDutch 32. This is perhaps because he (or she) owns everything and seeks no reason for further appearance. Or perhaps because he or she feels like a truly fulfilled aesthete, and looks at the details of the boat which allow him or her the pure class of the dandy: sensitive, not at all provocative but exuberant and sometimes irreverent.

Let’s call it personal identification with the nautical object: Vandutch proposes “party-boats”, but there is little of the party-like narcissism, especially in the lines. Minimal and conceptual: this is how nautical art is expressed on board the VanDutch by the pencil of Mulder Design.

The post-Victorian poets added another concept, that of a vice that leaves one unsatisfied and is therefore “perfect”. 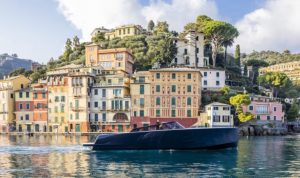 represent a different way of experiencing yachting, setting aside the canonical repetition of classic nautical forms and architecture. Starting with the preponderant handrails – forget them – and the bow sundecks that have already been seen over and over again. On the VanDutch 32, the foredeck is pure geometry. A precise volume stretching out over the water, culminating in the vertical bow.

The boat’s bow is completely extended, like a line parallel to the sea. As we were saying, there is no sundeck at the bow, but there is the beauty of a spectacular deck, like a Gerhard Richter painting. Below deck there is a cabin to enjoy shade, air conditioning, privacy and relaxation, as well as the perfumes and the fusion sound system, connected to the Wi-Fi of your smartphone, and two berths.

The scene on board is lively at the stern, which is very large and protected by the bulwarks. The cushions are refined, handcrafted, elegant and so pleasant that they seem to awaken the senses. The central element of the stern is a sofa that continues in an “L” shape in the cockpit. The stern, on the other hand, culminates in a beach area: open to the gazes of curious people strolling along the quayside, or free to the transparent waters of a Caribbean bay. 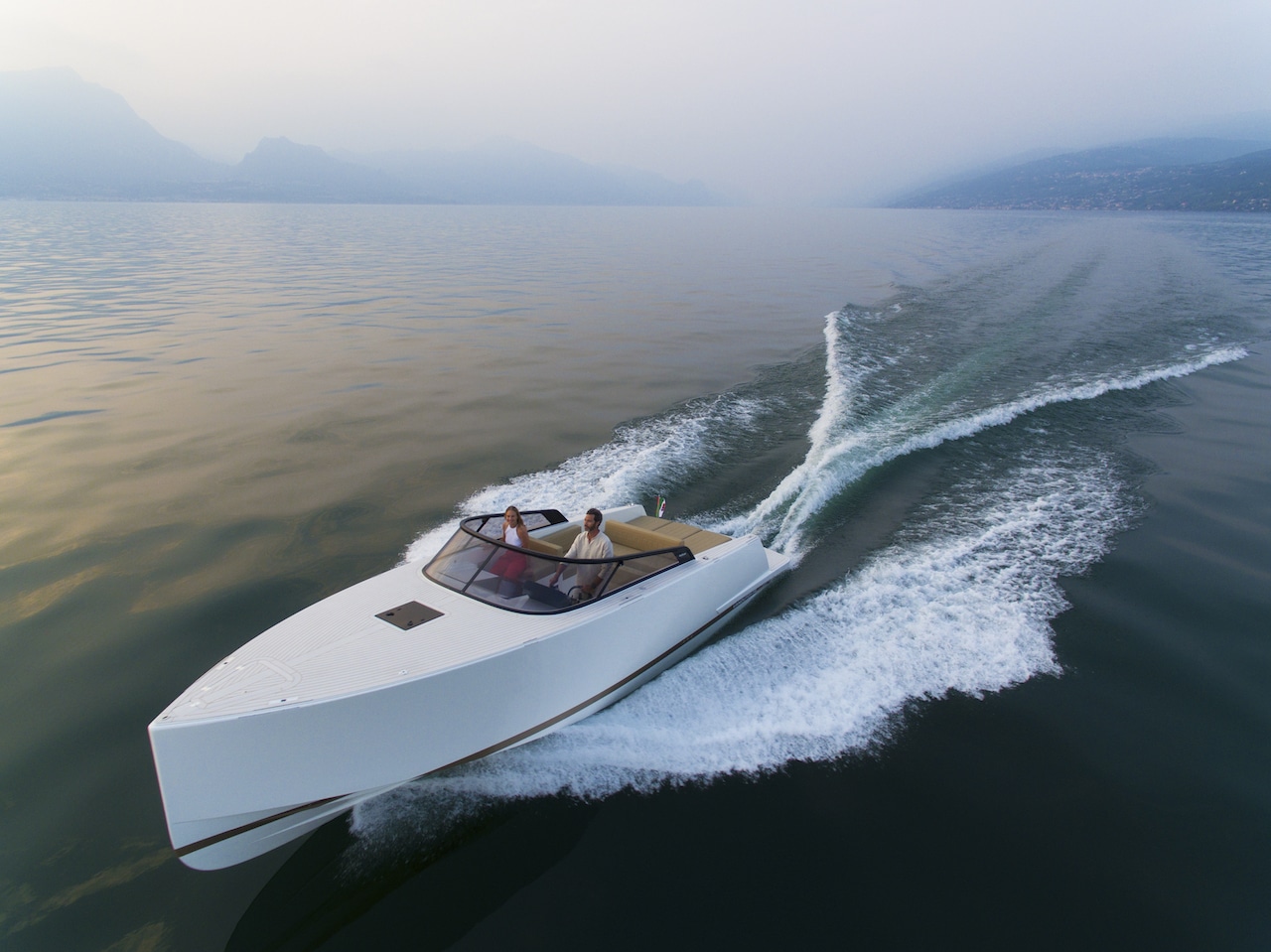 A polarized, discreet windscreen runs semi-circularly around the central part of the boat. The helm station is user-friendly, the anchor is dropped at the touch of a button. A substantial Garmin 16″ display takes stock of the boat and navigating the electronic cartography. There’s also an optional joystick (but who wouldn’t?) for easy mooring for those who think more of champagne than fenders. There’s also a fridge under the seat of the passenger’s side settee, which “also contains a practical foldaway washbasin to provide passengers with fresh water without having to go below deck”.

Where can VD be found?

There will be four VanDutch Centres worldwide. Ultra-exclusive stores are planned in renowned locations such as Saint Tropez, Miami, the Balearic Islands and on Lake Garda. “In order to have a very high control of the brand image,” explains Veronica Bottasini, Communications Manager at Cantiere del Pardo. The stores will also have to display the entire VanDutch range, ranging from the VD 32 to the VD 56 and “a VD 75 is also planned for the near future”. A total of thirty or forty VanDutches per year will be launched; it is a “niche” product, adds Veronica.