Comparative test for the three leaders of synthetic teak decking

The use of synthetic teak in marine decking is quickly and successfully replacing that of the natural wood.

There are many companies producing this material today but only three are the most popular and the most widespread ones. We therefore decided to compare the best of the current production in a no-holds-barred test. 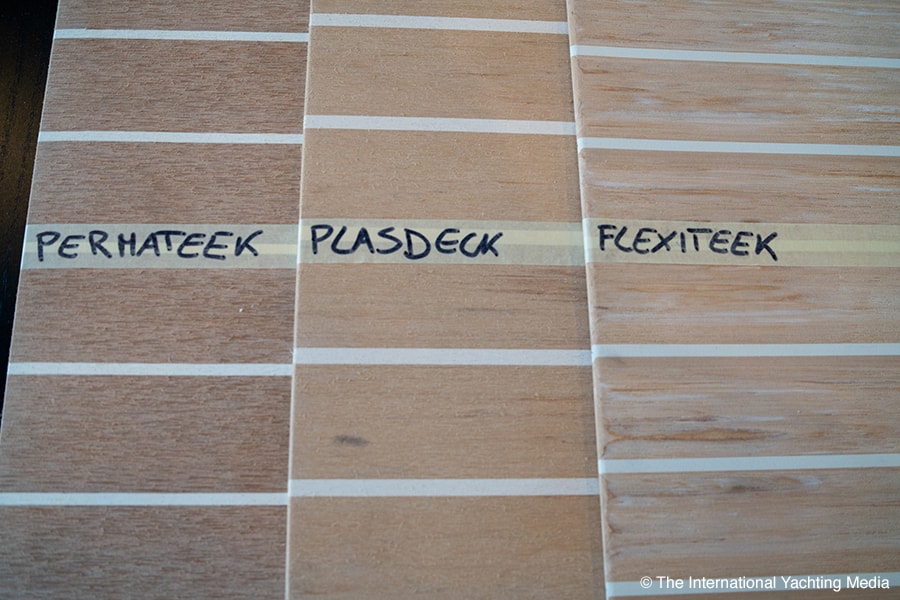 So, we contacted the three companies and asked for some samples. The only request we made was that the synthetic teak to be sent to us was their best product and the one most similar to natural teak.

This way, we had the opportunity to test and compare, in a very simple way, the features that most affect the choice of synthetic teak (all our staff was involved in the test and everyone was asked to express his own opinion).

The synthetic teak we tested is, in alphabetical order, the Flexiteek, the Permateek and the Plasdeck.

Here’s what we found out:

First of all, we decided to analyze the aesthetic appearance and therefore the element that makes both boat owners and their guests fall in love at first sight.

Of course, it’s a subjective yet important choice since, once chosen, the synthetic teak has the implicit characteristic of maintening the same appearance over years.

More specifically, Flexiteek shows veins and shades that make it, in a natural way, very similar to real wood. Its colour is light biscuit. 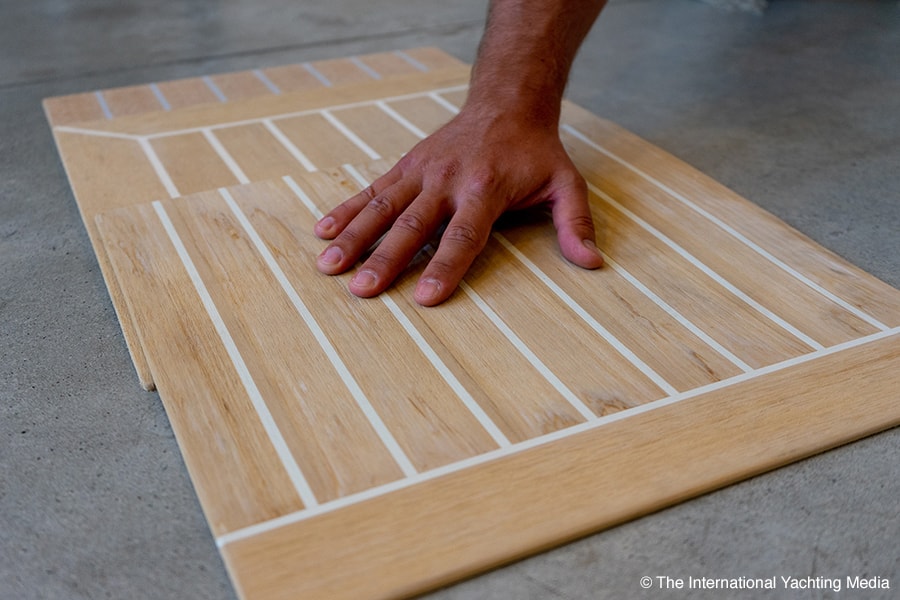 biscuit-colored but its finishes are less processed, which makes it look a little “flatter” and less natural.

The Permateek Classic, instead, is very different from the others since its darker colour makes it more similar to aged or oil-processed wood. However, the typical nuances of wood are absent. The veins in relief, reproduced during the processing phase, are instead very marked and visible throughout the panel. But they don’t seem natural at all.

Another difference between the three products concerns the width of slats and seams. Flexiteek’s ones are narrower, slimmer and more elegant while the other two are wider.

As for the tactile sensation, we noticed that there’s a big difference between the three products. Permateek is made of harder and rougher plastic, Flexiteek is softer while Plasdeck is somewhere in between. 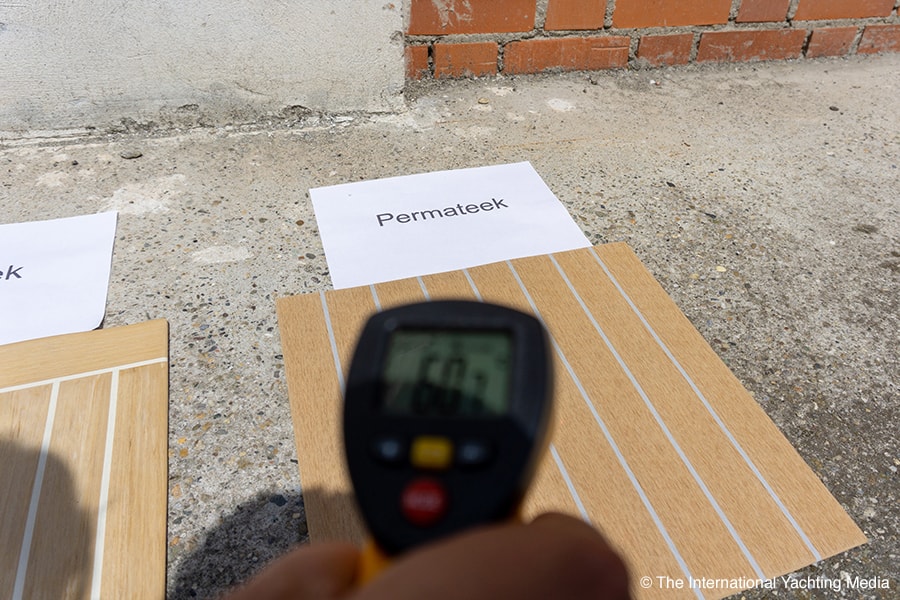 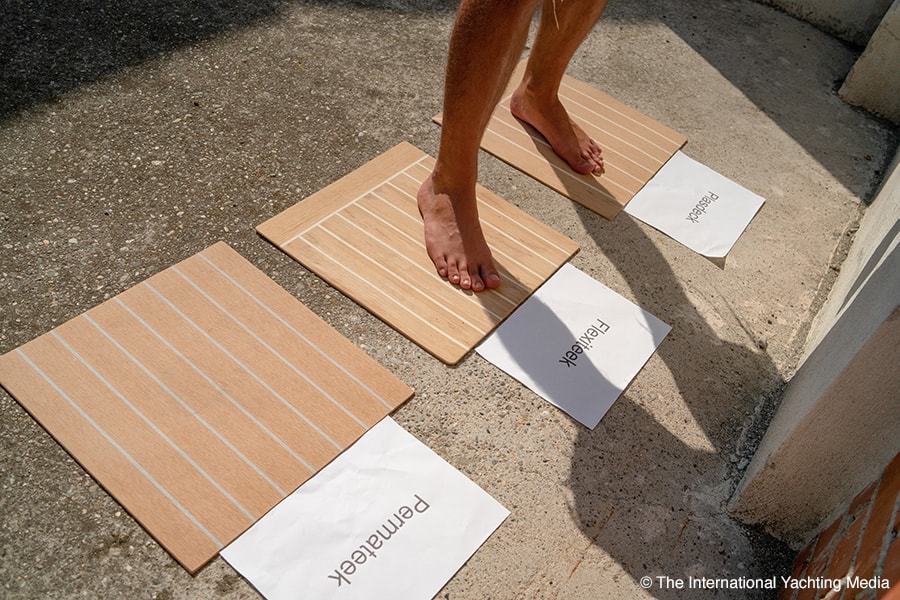 Permateek is also the darkest one but, at the end of the day and even after having remained in the shadow for more than one hour, it was still the hottest one (36.8°), which suggests a longer heat retaining effect.

The other two panels, instead, turned cold more quickly and, after having remained in shadow for one hour and despite the difference in their peak, they reached the same temperature of 34.8 degrees.

In addition to thermometric measurements, we also tested the sensation of warmth transmitted by the materials, walking barefoot on the different teak panels. This step resulted in a further confirmation and a surprise.

The Permateek was the hottest and the contact with the sole of our foot confirmed that. Moreover, the sensation of warmth remained on the foot for some minutes, which confirmed the excellent warmth retention capacity of the material.

Flexiteek, instead, while not registering the lowest surface temperature, when it came into a prolonged contact with our foot, proved to have the lowest warmth retention capacity. This suggests that the material composition (Flexiteek G2 patent) ensures greater heat dispersion.

In conclusion, this second test concludes with Plasdeck and Flexiteek coming joint first and Permateek in last place.

We calculated the weight of our panels on a m2 basis. This time, Flexiteek proved to be the best product. This is an important aspect to take into account when dealing with a boat. The following table shows the overall weight of teak decking on a 13-meter sailboat.

Let’s take into consideration a sailboat, especially a performing one. A lower weight on the deck not only contributes to reduce the overall weight but also and above all reduces the weight positioned above the waterline. This way, the centre of gravity of the boat remains lower, which contributes to reduce heeling when sailing while improving performance.

This is also true for motorboats that, as you know, have wider decks and therefore need more square meters of synthetic teak. On these yachts, the main difference lies in comfort and not in performance. Especially if these boats are equipped with a flybridge: a lower weight on this means lower rolling for the yacht itself.

The main goal of 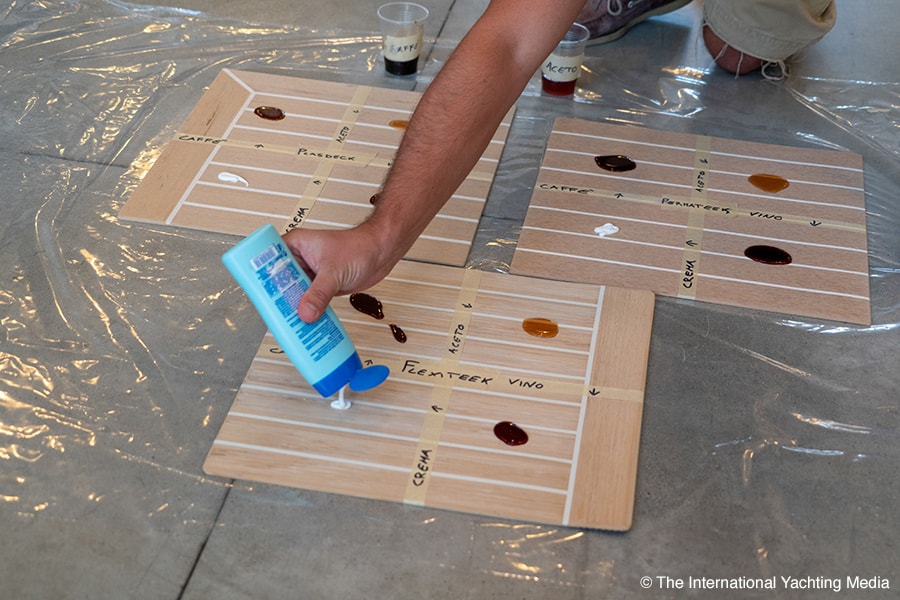 our test was to see the real reaction of the three materials to the contamination caused by the overthrow of some of the most common staining products, those that pass on the deck day by day: coffee, wine, vinegar and sunscreen.

For the first part of our test, we spilled some staining substances and we left them on the teak surface for about one minute; then, we removed everything with what is the most used method on each boat, ie water.

The result is the same for all the three products: stains were removed with a simple cleaning carried out with the hands under the flowing water. 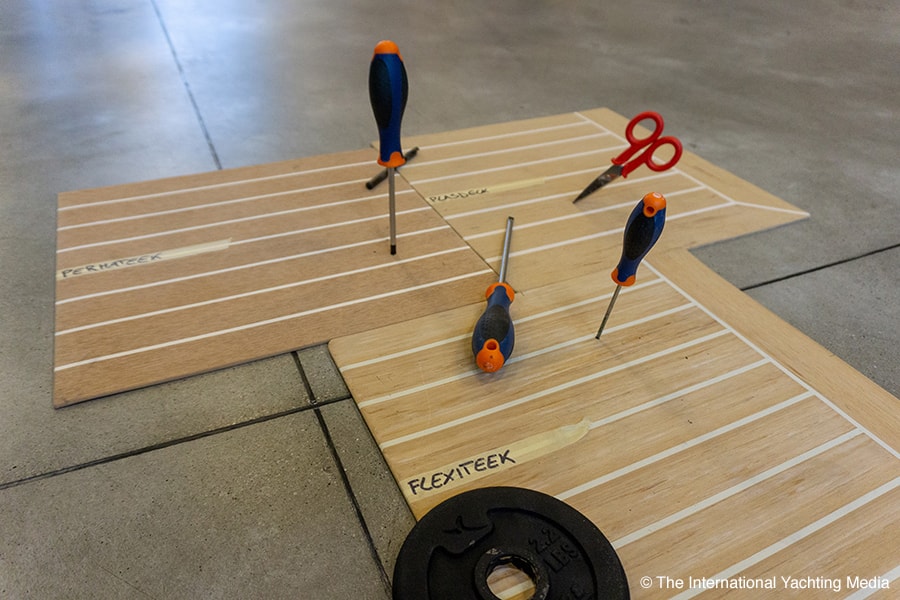 In this respect, too, the three products are almost the same. All the materials passed our crash tests (we dropped anything on our samples, even very heavy items) and no damage was registered.

Things changed when we tried to pierce the panels with our scissors and screwdrivers in order to simulate the most common deck accidents. This time, no sample passed the test: all of them let themselves be pierced ( the Permateek with a little bit of difficulty). This is maybe inevitable with a plastic material that, after all, is not so different from natural wood that, unlike synthetic teak, cannot be repaired if not with a long work.

In order to test grip, 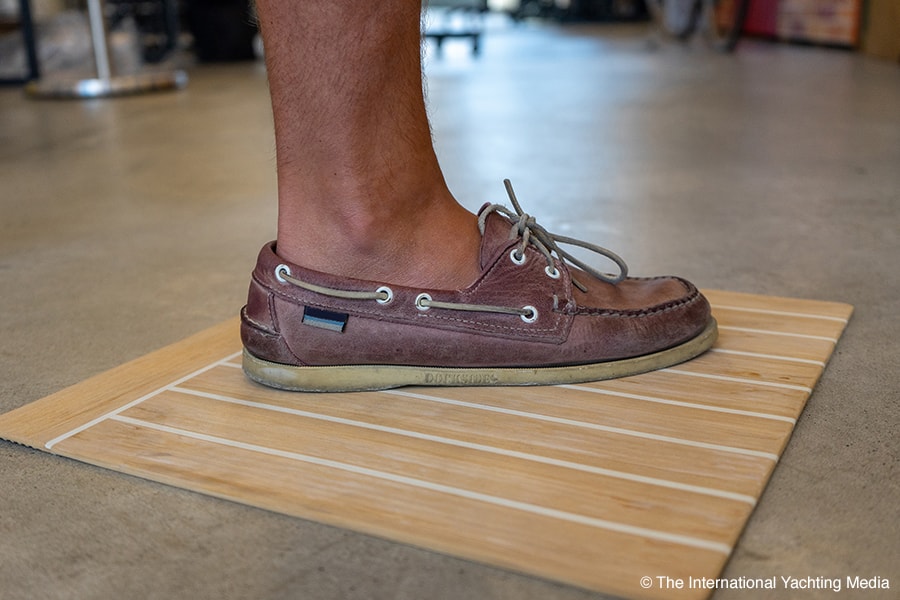 we decided to carry out a very simple test: to create an inclined plane where to put our teak samples with a sailing shoe containing a weight on it. The maximum inclination reached by the shoe without slipping was very similar for all materials. We tried many times and we reached a 36-degree inclination: an excellent goal, beyond which no material produced enough friction for the shoe to remain glued to the surface.

To the touch, the Permateek proved to be the roughest material, capable of the best grip thanks to its more market veins.

The back of panels, predisposition to gluing 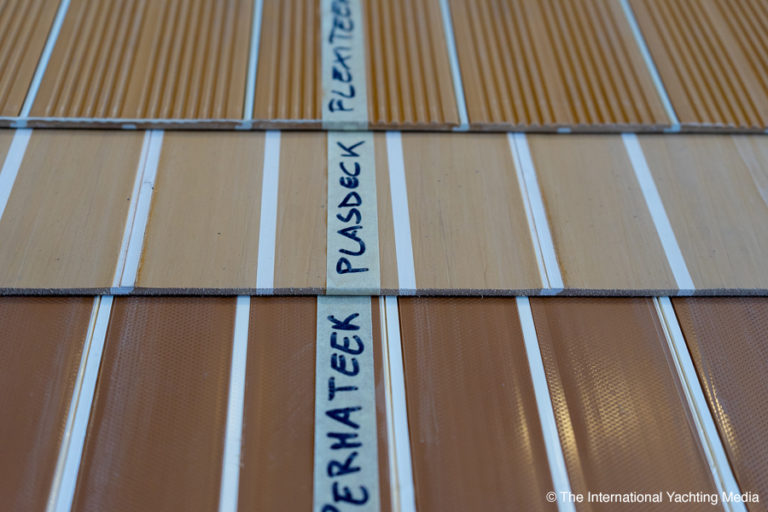 The three materials have a much different side B.

Flexiteek is highly processed and shows a series of grooves (another patent of the company) that facilitate gluing without bubbles and “slipping” effects. Permateek has a micro-perforated bottom while Plasdeck is the smoothest one.

For obvious reasons of simplicity and installation quality, this chapter concludes with this final ranking: 1 Flexiteek – 2 Permateek – 3 Plasdeck

Rankings speak for themselves and, even if individual differences are not big, Flexiteek is undoubtedly the absolute winner.

It proved to be multi-purpose, highly efficient in all respects and even the most similar one to natural wood.

However, it is also true that boat owners, or better their personal tastes, have the final say. These synthetic teak panels are offered for sale in many colour options, so you can choose the colour combination you like the most or that best matches your boat.

We thank all three manufacturers that, as proof of their good faith, accepted the test without hesitation.